TAPS (Tactical Augmented Pressure Switch) from TNVC and Unity Tactical is a complete one point command and control system for all weapon-mounted electronics. It provides low profile, dual-device control for lights and lasers. TAPS mounts directly to any industry standard rail, including M1913 Picatinny, KEYMOD, and M-LOK. No third party rail adapters are needed, keeping the weapon lighter and sleeker. It features two on-board buttons and two accessory leads. 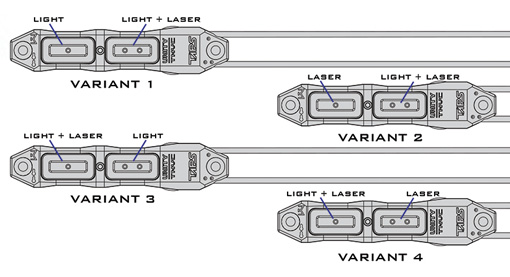 This TAPS switch comes standard with a Surefire Light lead and MIL-Standard / Crane Laser Lead that fits NATO standard lasers from Insight Technology, Steiner, B.E. Meyers, and others. TAPS is waterproof to 1 meter for 30 minutes when properly installed on a rail, and features more durable buttons than many competing pressure switches on the market. Its hardened housing will keep TAPS standing up to the rigors of the battlefield

TAPS SYNC allows the user to fire two devices simultaneously with one button, and is available in 4 button variations: